Spiel.digital is the first online edition of the international game days. The SPIEL in Essen is the largest trade fair in the world. Last year over 1.200 exhibitors from 53 countries showed their games and over 200.000 visitors from over 100 nations made the pilgrimage to North Rhine-Westphalia to pursue their favorite hobby for four days. Our author Johannes has created his personal “Most Wanted” list for the upcoming Spiel.digital.

The number of visitors has risen steadily since the first trade fair in 1983. At that time, almost 5.000 people found their way to Essen. Board game publishers from all over the world use the game fair to present their new products and to give players the opportunity to get a first-hand impression of their games.

A lot is different this year. Due to the global pandemic, the Berlin-Con had to be postponed to December and the SPIEL to next year. From October 14 to 17, 2021, the next regular Games fair in Essen take place. Fortunately, we don't have to do without SPIEL this year. SPIEL Digital will take place from October 22nd to 25th. Online on game.digital or you can watch a detailed video about the concept of the digital game fair on the SPIEL_Messe YouTube channel.

I have looked at which games will be published around the SPIEL Digital and would like to present you my ten most anticipated games. I haven't played most of the games yet. A lot of information is already available for some games. Little is known about other games. After the SPIEL, we will hopefully know whether the games meet my expectations. So now it should start: 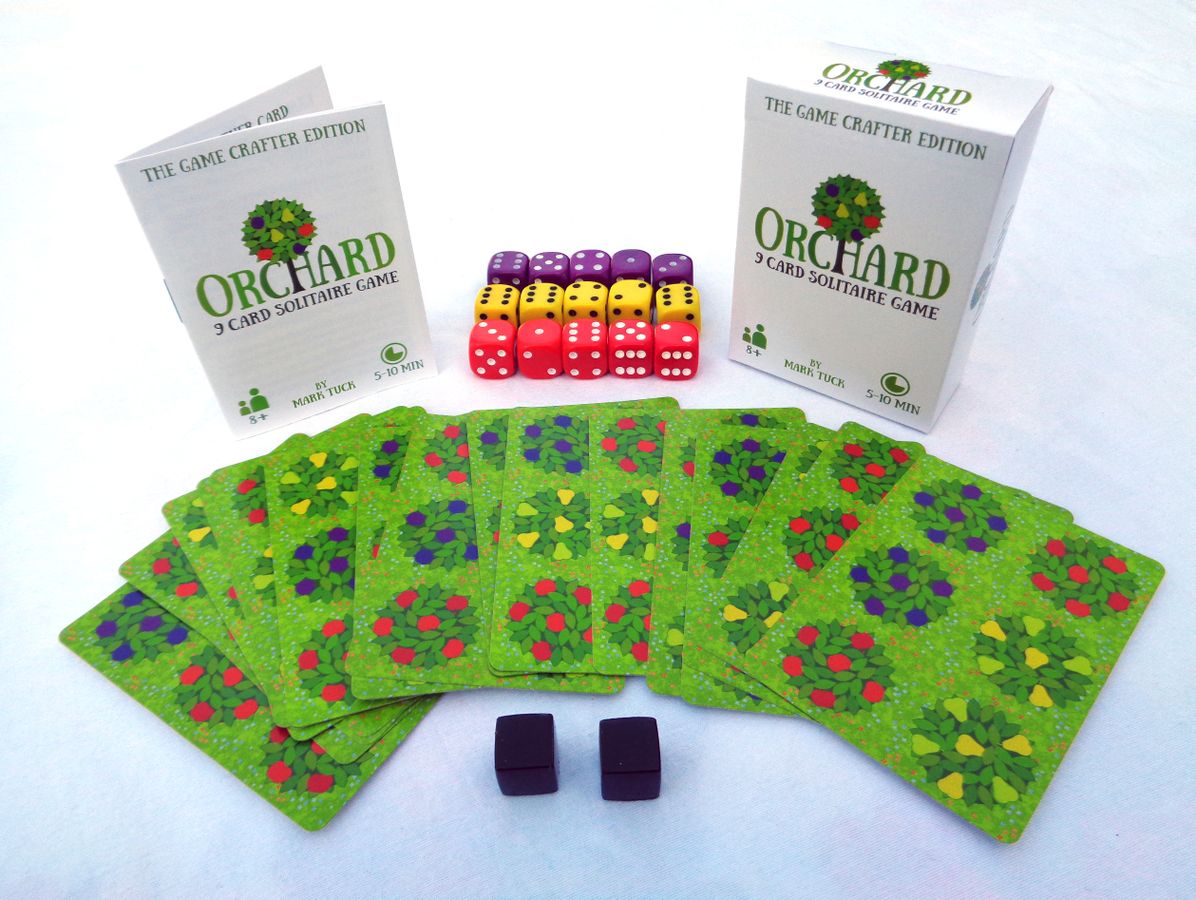 Side Room Games' Kickstarter campaign for the small puzzle game Orchard was successfully funded last year and delivered this year. The solo game by author Mark Tuck is now published in German by Board Game Circus. Obsthain contains only 18 cards, 15 dice and two wooden markers and very easy to learn rules. But the game is extremely clever!

It's the perfect game for in between. I keep getting the little box out of my game shelf and puzzling over the cards. There are also rules for more players. For this, each person must have their own game. I like the game so much that I now have Orchard at home twice.

Under Falling Skies is also a little solo game. Initially published as free Print & Play, the game will be released by Czech Games Edition in autumn. A German version is planned by Heidelbär Games. In the game by author Tomas Uhlir, it is our task to protect the earth from invasion by aliens.

The Print & Play version has been expanded by Czech Games Edition with a new design, miniatures and some new game elements. Every game of Under Falling Skies should be different and always be challenging. I'm definitely hooked and I'm looking forward to the German version.

From the global threat it goes back to nature. Kodama Forest is now the fifth game all about the cute tree spirits. After two card games, a Roll & Write and a 3D puzzler, Kodama Forest seems to be based on the concept of Between two Cities.

Two people share a game board and build their forest together. Tetris-like puzzle pieces are used for this. I really liked the principle of Between two Cities. Then there are the cute illustrations by Kwanchai Moriya. I'm looking forward to a relaxed tile placement game with a great look. 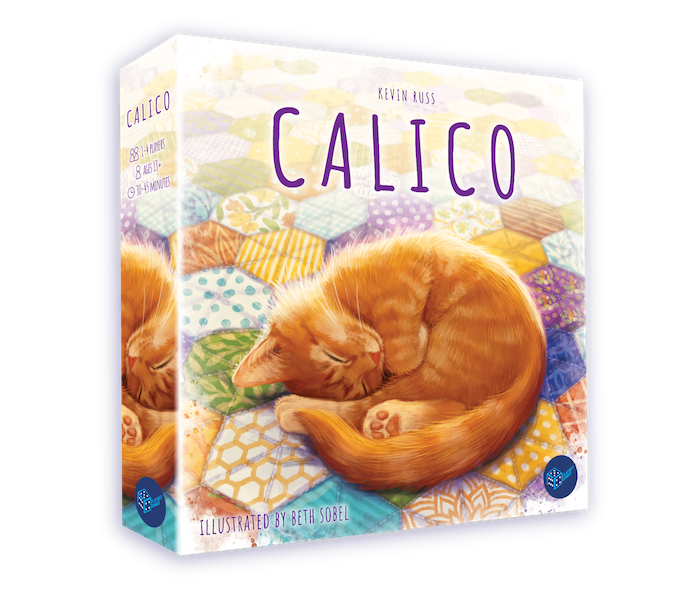 Unfortunately, I missed the Kickstarter campaign by Flatout Games, so I'm all the more looking forward to it Calico. The game marks the debut of author Kevin Russ. The cover makes cat lovers' hearts beat faster.

Illustrator Beth Sobel has worked on such beautiful games as Viticulture and Wing Flap in the past. Similar to Uwe Rosenberg's classic Patchwork, we put together a patchwork blanket. I'm looking forward to another puzzle game with a really great look.

The combination of Stefan Feld and Dennis Lohausen is already a house number. Bonfire appears at Hall Games and Pegasus Spiele.

The Complexity Rating of 3,5 BGG promises a complex game with an atmospheric look. In a world full of magic, the gnomes and guardians of light set out to find out which bonfire is no longer lit. I hope for a cleverly interlinked game.

With Bonfire, solo players can finally dare to play a game by Stefan Feld. The game should contain several challenges for games alone.

5th place: Clever to the power of three

Wolfgang Warsch is certainly not entirely innocent of the Roll & Write hype. A modern classic and a pleasantly complex dice game has become quite clever.

In countless games, whether alone, in a group or on the smartphone, I've cleverly combined dice and haven't had enough of the game.

After twice as clever from last year and two alternative scoring blocks, Clever to the power of three now follows. The first sequel was a tad more interlocked than Pretty clever. I'm really excited to see what the third part has to offer.

4th place: The island of cats

The Isle of Cats by Frank West made waves. The game should not only be a clever puzzle game, but also offers a lot of beautiful cat meeples. on Kickstarter the game was funded by over 8.000 supporters with almost 470.000 US dollars.

Not much is known about CloudAge yet. It is the new game by Alexander Pfister and transports players into a dystopian future. On top of that, Alexander Pfister uses a mixture of engine building, deck building and resource management together with an innovative sleeving mechanism.

I'm really excited to see how this mix comes together to make a game. The setting also reminds me pleasantly of Mad Max. The game should be playable both as a campaign and in individual scenarios.

I fell in love with Underwater Cities in the first game. I was thrilled how Vladimír Suchý connected town planning and a great map mechanism. The New Discoveries expansion made the game even better. Praga Caput Regni promises to be a real breaker for Suchý again.

One to four players build the city of Prague for the Bohemian king. According to the first pictures, the game looks very complex again and seems to offer high quality material. I'm really looking forward to getting involved in urban planning! I'm not looking forward to any game this year more than to the new expert game by Uwe Rosenberg. In recent years he has published rather shallower games and Hallertau seems to be the big bright spot for fans of Ein Fest für Odin and Arler Erde. I'm also looking forward to the new puzzle game from Rosenberg New York Zoo, but Hallertau really did it to me.

I hope that the entire gaming table is fully covered again with various game boards and countless wood resources. Uwe Rosenberg teamed up with Klemens Franz and Lukas Siegmon for Hallertau. The first pictures of the components look fantastic. So the game could not only be another fantastic Uwe Rosenberg game, but also a wonderful game.

These are the board games that I look forward to the most. Which upcoming games are on your list and are you curious to see how SPIEL Digital will go? Final Fantasy 7 Coming As A Board Game: 'Soon'