The third part of the colorful multiplayer shooter Splatoon will be released on September 9, 2022 for the Nintendo Switch. The game can already be pre-ordered for 59,99 euros in the Nintendo eShop. On August 27th fans can play a demo version for 12 hours.

As part of today's Splatoon Direct, a variety of innovations that the new part will bring were presented. These include, for example, new maps, weapons and game mechanics. The latest information is detailed below.

More maps and expansion of movesets

First of all, let's take a look at the combat modes in Splatoon 3. All of the modes from the predecessor, namely Turf Battle, Tower Command, Goldfish Cannon, Shell Mayhem and Domination, will return to the game. Furthermore, the movement move set is expanded with new techniques such as the wall jump or the squid roll. The special thing about the squid reel is that it can repel enemy ink under certain circumstances. New effects on clothing, such as Action+, reinforce the techniques.

Of course there is also a selection of new maps in the third game in the series. These have the following names:

All in all, these appear much livelier than in the previous parts. The eight new maps are joined by four maps already known from Splatoon 2. 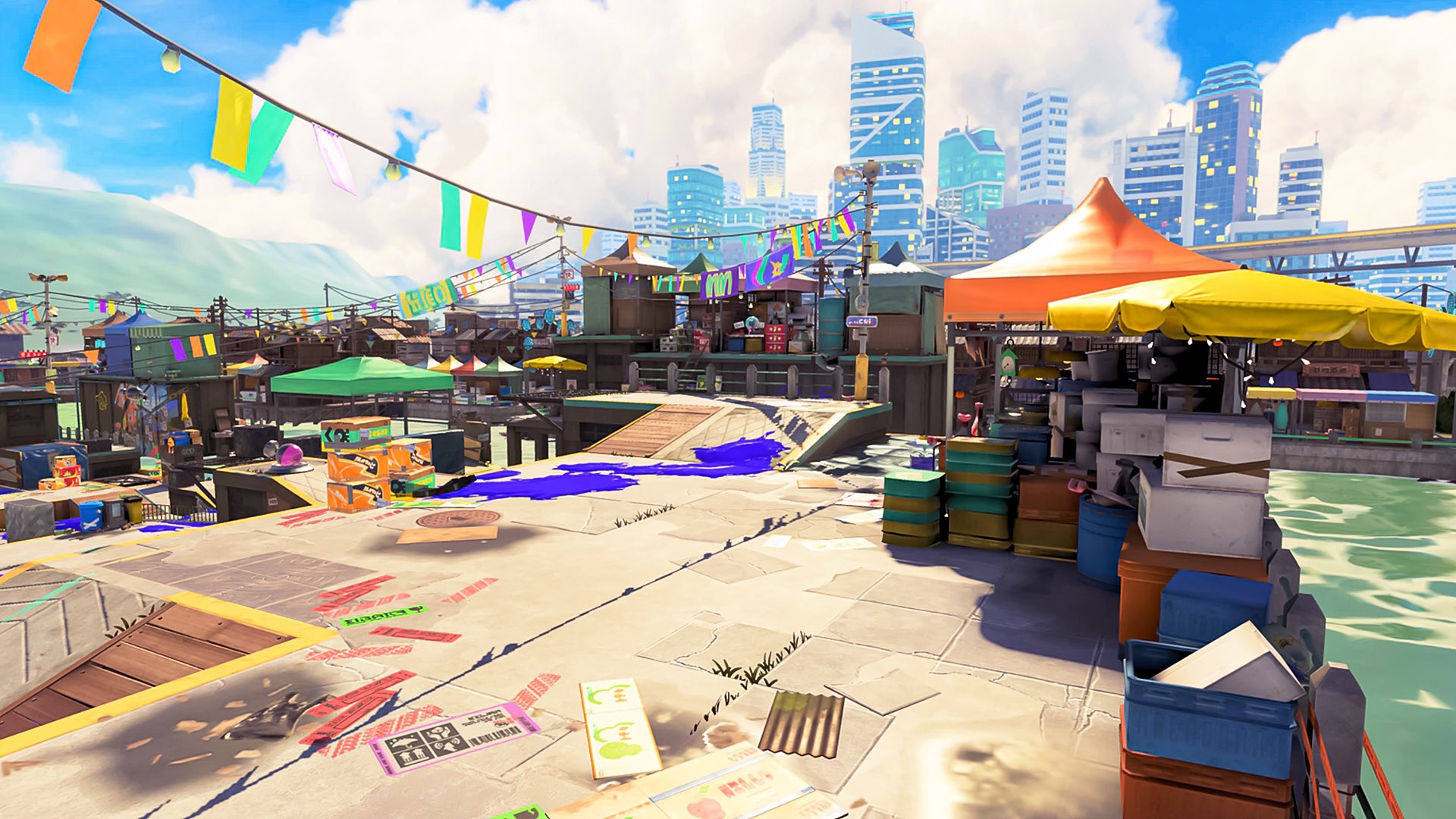 As far as weapons go, it has now been confirmed that all of the standard weapons from the predecessors are returning to the game. The new weapons include the arc-like Stringer and the weapon type Splatanas. Its shape is reminiscent of a window cleaner and shoots ink blades at a great distance. In addition, the player can use it to perform a so-called charging hit.

As usual, the special weapons are linked to the main weapon and must be charged with dye points during the course of the game. The first special weapon featured in the Direct is the potion tank. This refrigerator contains four beverage cans that are picked up by the team. The players are given various temporary effects, such as a speed boost. The shower wave, on the other hand, is reminiscent of a shuttlecock in shape and fires off several shock waves. If one of them hits the opponent, they are marked and take damage. The final special weapon featured is the Shark Hammer. If this special weapon is activated, the player rides on a shark with which he can ram enemy players. At the end of the attack, an ink explosion occurs. In addition, all known special weapons from Splatoon 2 are carried over. 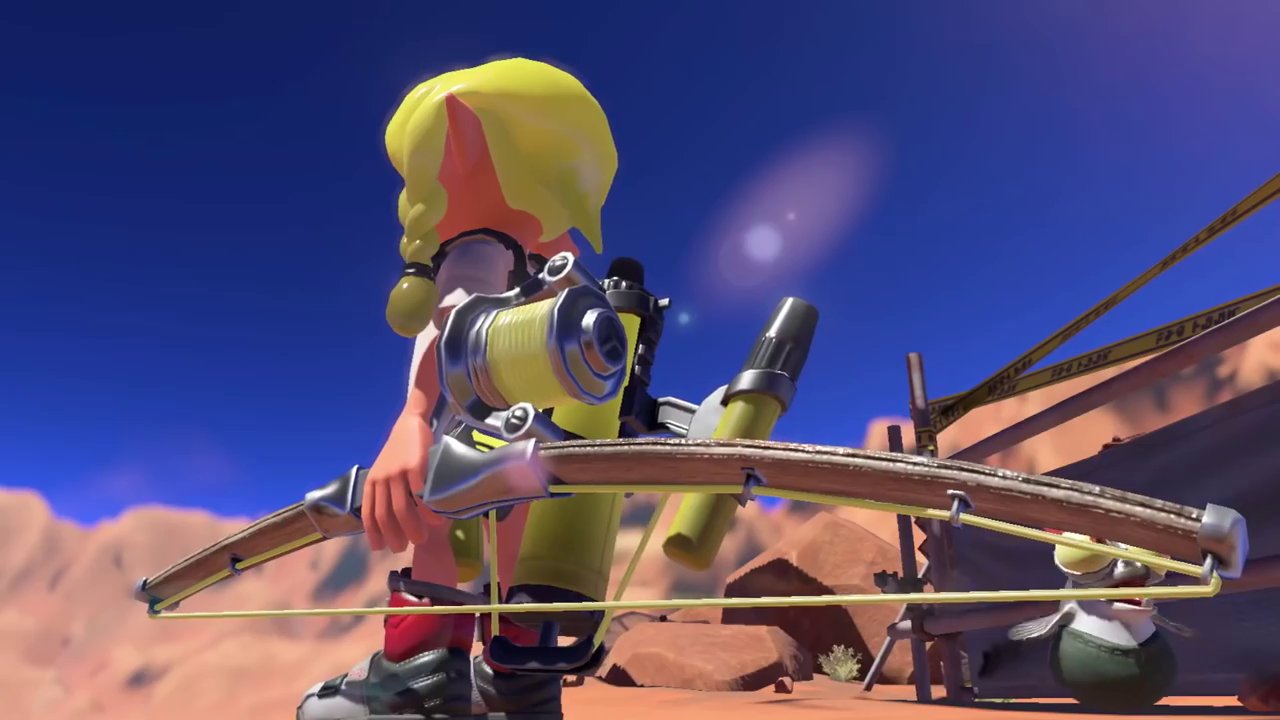 Battles in Splatoon 3 are started from the lobby as usual. This has been expanded to include some new areas. In the practice area, the player can test their weapons and practice target shooting before the actual battle begins. Friends who are online in the game are now shown as 3D holograms that move in real time when playing together. On the so-called terminal screen, players can view their last matches as often as they like, edit highlights from them and then post them. Another area presented in Direct is the locker hall. In this, each player has a locker that can be individually designed with items and stickers. These are purchased at the Deco & Co. store in Splatsville. In addition, the player independently selects the size and color of the locker.

Other design options within the game include the splash tags. These appeared on each player before battle and can be customized with banners, badges, and original titles. In addition, emotes are now executable after a win. New splashtag and emotes are unlocked as you progress through the game. The item catalog changes every three months, a system similar to a battle pass. 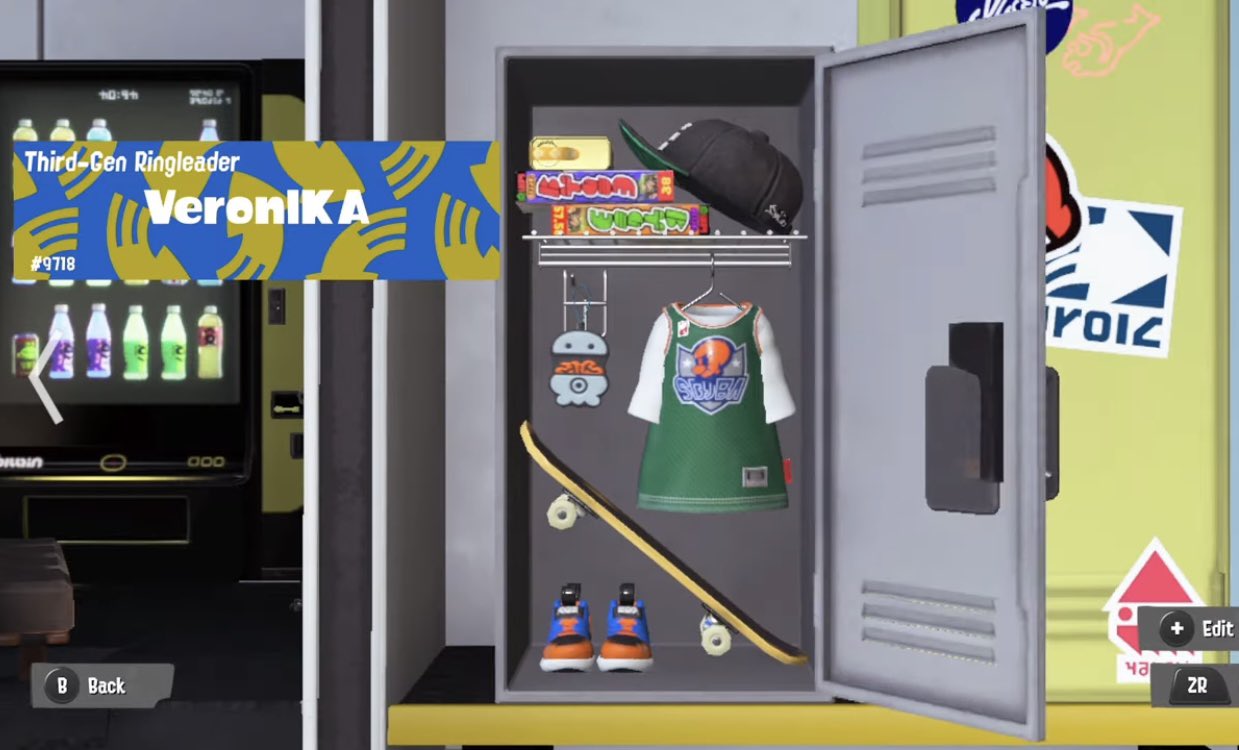 Within Splatoon 3 there will be a 1v1 mini-game called Turf Decks. The mechanics of this card game are a kind of fusion of Tetris and turf wars. Each player has a deck of cards, each coloring a different shape on the geometric board. The more of your own color is filled, the more points you get. In total there are over 150 cards of characters from the Splatoon universe. New decks and boosts can be unlocked by playing Turf decks.

In the Salmon Run cooperative mode, four players must work together on a map. The goal is to collect fish eggs from attacking salmonids and hunt down their bosses. From these, the players receive gold fish eggs, which they have to bring to the basket in the middle of the map. A certain number is required to successfully complete all three attack waves of a run.

As part of the presentation, newly discovered species of boss salmonids were presented. First, there is the so-called saucer-like deckler. This Salmonid floats above the ground and can spawn basic Salmonids. A kind of barrier below the deckler protects the player's enemies. If the player gets under him, he falls to the ground and causes enormous damage. The Kanonya is a large, muscular creature that shoots iron balls from a cannon over a very long distance. These create a shock wave when they hit the map.

Also new in the Salmon Run is the so-called Ober-Salmonid. After the actual job ends, the huge and terrifying Salmonid may appear randomly for a limited time. It's then up to players to reset that creature's health bar using a special back-mounted Gold Egg Cannon. In addition, the Salmonids appear more frequently in the mode as part of a Big Run that takes place every few months.

Return of the Aquamarines

As with its predecessor, the entrance to the story mode is in a manhole cover in the metropolis of Splatsville. The protagonist in Splatoon 3 is Agent No.3, a newcomer to the Aquamarine. Together with his Salmini companion, he fights hairy Okatarinar in the individual levels and areas. The in-game story represents the finale to the entire Splatoon epic. 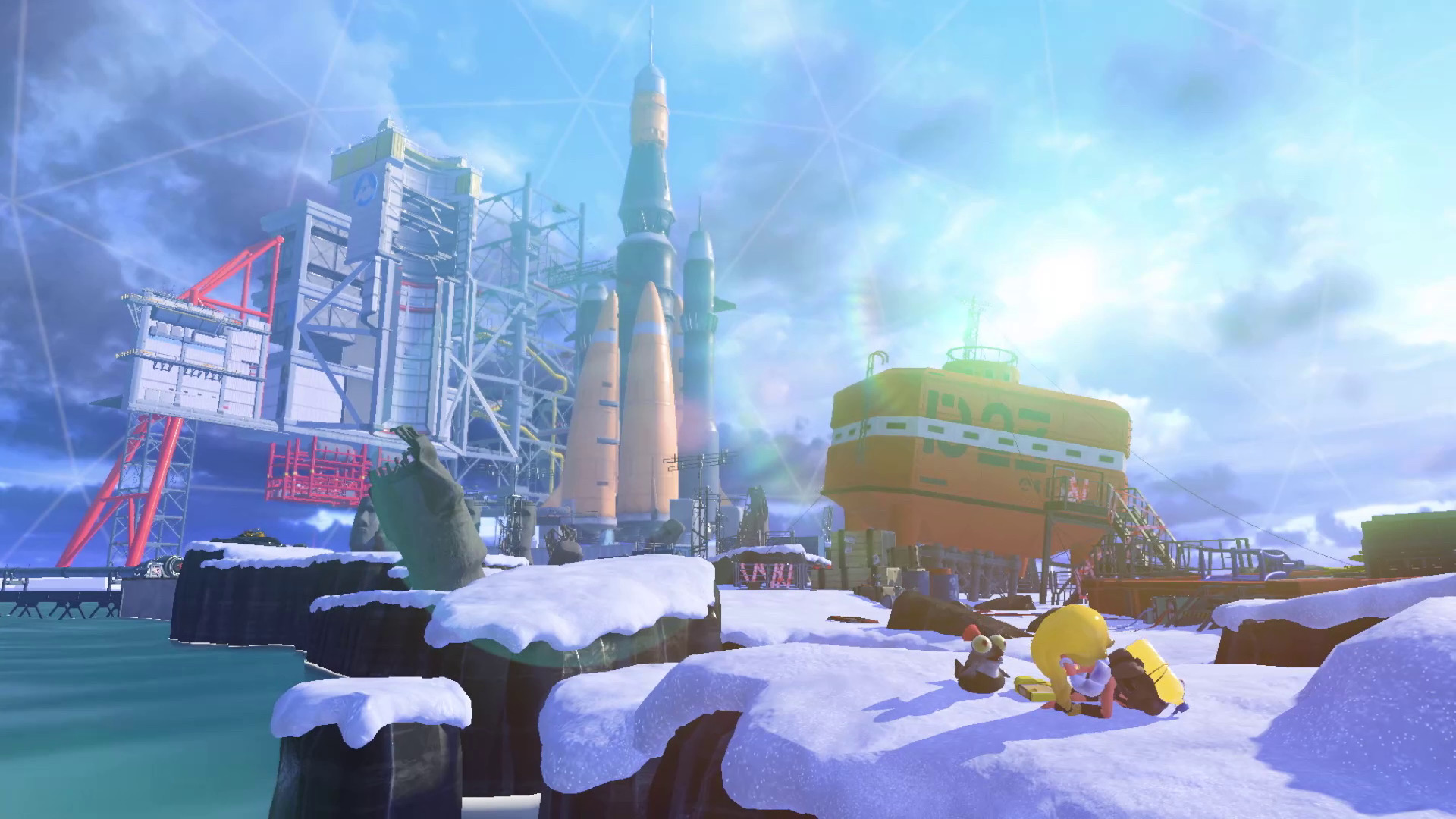 All features in Splatsville

The old-fashioned metropolis of Splatsville, surrounded by wasteland, represents the heart of the game. The player can reach the lobby or various shops via the central square, for example. One of them is the Kalmarsenal weapon shop known from Splatoon 2. Here weapons can be purchased with the newly introduced currency ArtyCards. The player earns ArtyCards by regularly using a weapon or by leveling up in battles.

In addition, there will again be shops selling clothing and equipment: Naute Couture, clothing boutique Médusalon and the shoe shop Pumpstation, run by a bodybuilder shrimp. Furthermore, the snack bar, the black market trader Sid, the Inkade and the mailbox have a place in Splatsville. Ambii figures can also be scanned again at a specific location in the city. All Splatoon Amiibos can be used. Equipment combinations can be saved on them and special rewards can be obtained. The release of three new Splatoon Amiibos, including a Salmini figure, is planned for this winter.

All of the game's maps can be explored using the Arena Guide. 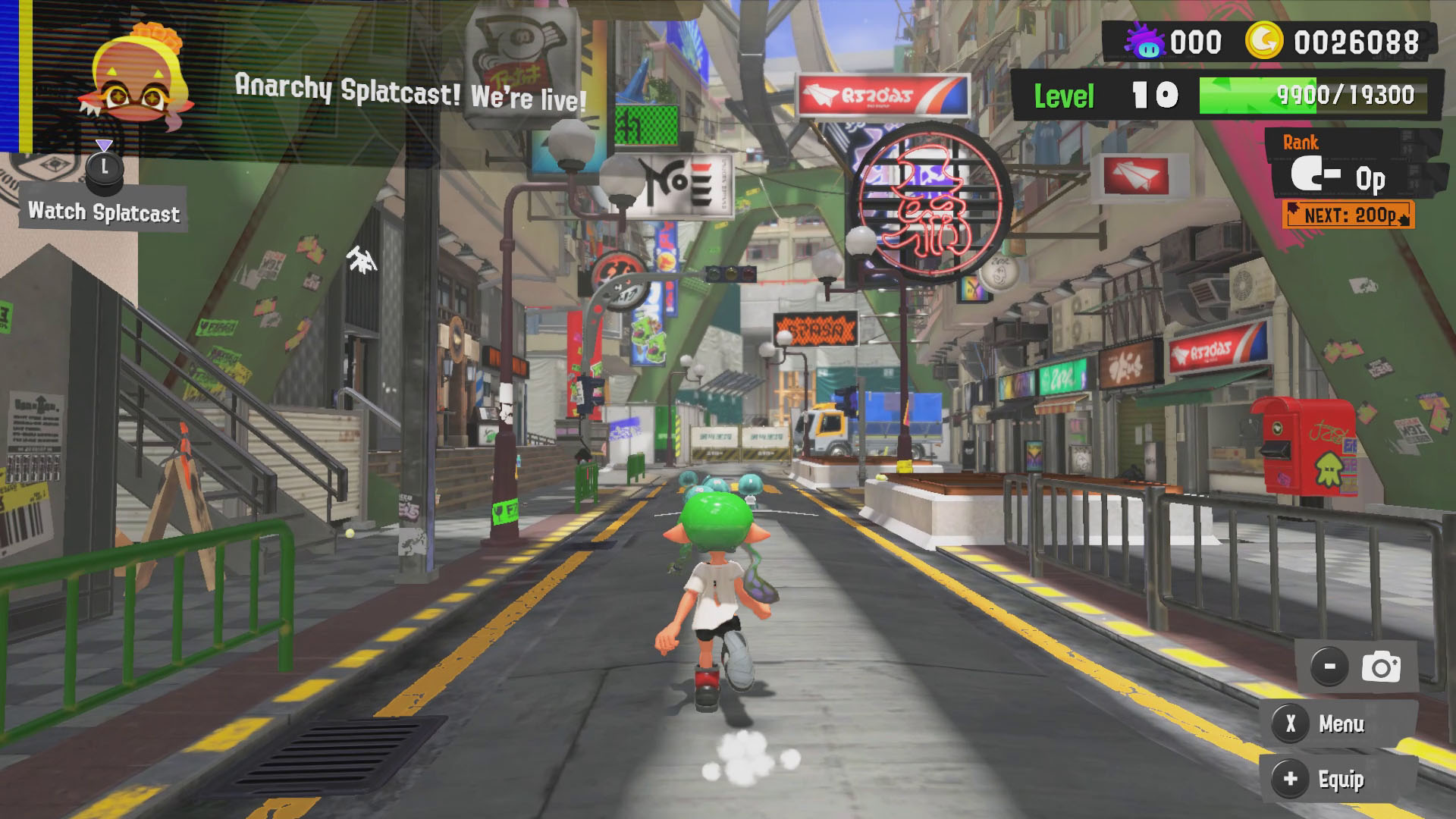 This smartphone application contains detailed information, downloadable backgrounds and up-to-date combat statistics from the game. In addition, special equipment can again be purchased in TentaWorld. The Shrimpson Tour is a new addition. Here the player gets rewards depending on the current coloring points. SplatNet 3 will be back on the Nintendo Switch Online app for Android and iOS.

Host Trio and Twist during Splatfest

Muri, Mako and a ray-like creature called Mantaro will form the so-called Surimi Syndicate in the game. Together they serve as announcers for the news program Anarchy Splatcast. This provides information about the current map rotation and no longer has to be viewed when the game starts. The splatcast will be accessed by players using their Sea Cucumber phones. 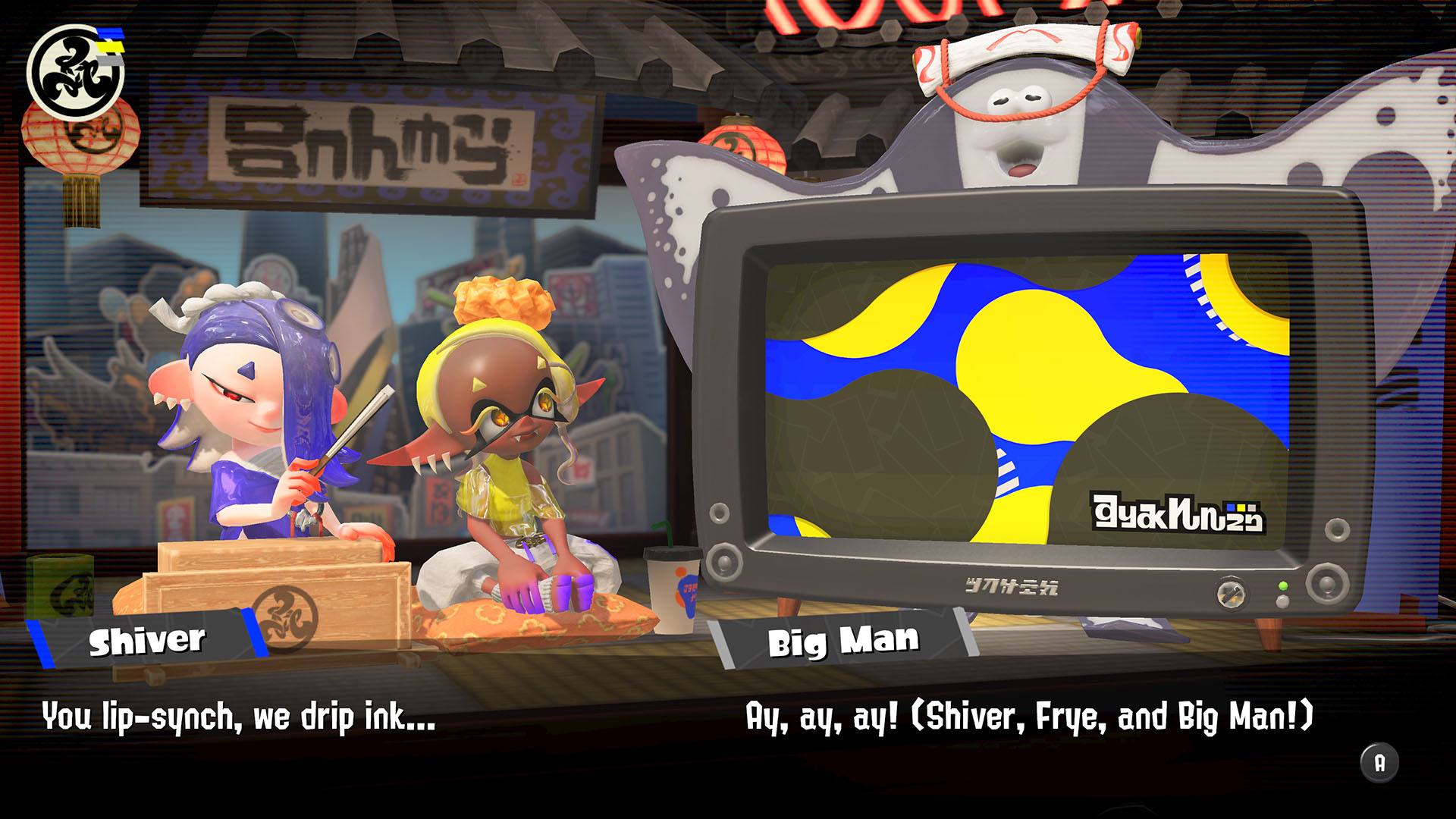 Additionally, the monthly Splatfest will return. In Splatoon 3, three teams will compete for dominance around a specific theme. During the first half of the event, classic turf warfare is played and then the new three-color fight. In this mode, three teams compete against each other on a map. One of them starts in the middle of the map and has to fend off the two teams attacking from the side. On August 27th, a Rock-Paper-Scissors themed Demo Splatfest will be held between 10:00am and 22:00pm. 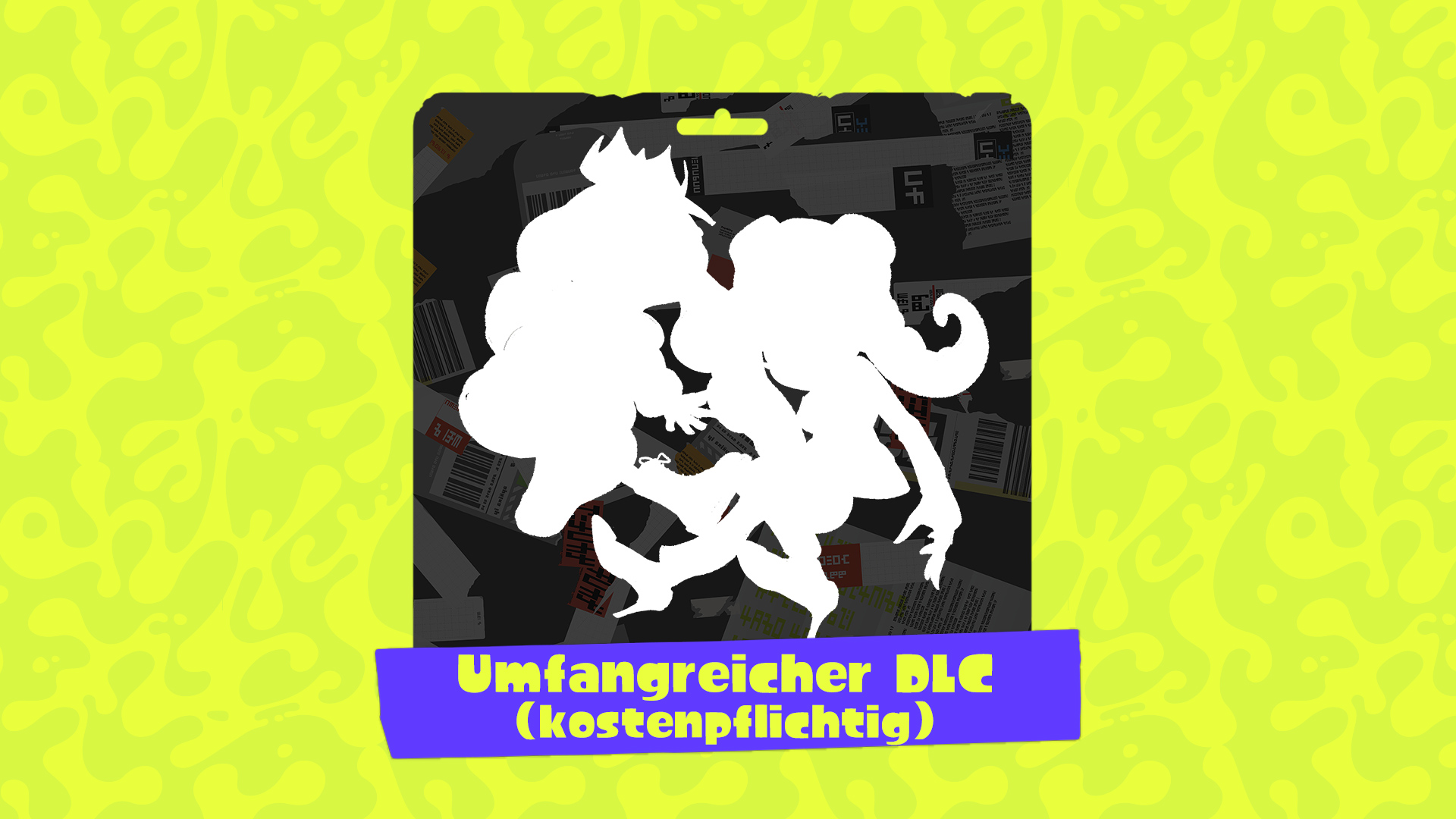 A new in-game catalog and weapons will be released every three months for almost two years. Furthermore, there will be a free update with new maps after the release. In addition, an extensive, paid DLC is planned. More information on this will follow in the future.